Rickson Makwe Moved to Canada to pursue a career in music.

Rickson began his music career touring with a band, playing festivals and recording in his new country. However, although things were better in South Africa than in Congo, he still experienced hardships. Rickson was offered a record deal by Goma Records in South Africa, but decided against signing it. He knew he wanted to put roots down in a place he felt he could be safe and free. He was eventually given an opportunity to move to Canada through the UN.

Rickson Makwe (Ricky Makwe Bazilepo) is a songwriter, singer and keyboard player born in the Democratic Republic of Congo in 1986.  Rickson lost all his vision in a bombing which broke the walls of his school at the beginning of the First Congo War in 1996. He eventually fled from his home country to South Africa in search of refuge. Since that time, music has been the driving ambition in his life. 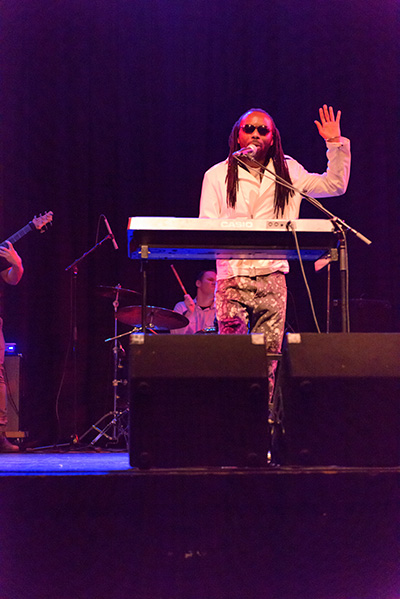 Something Fresh and Different

As a singer songwritter and keyboardist Rickson Makwe takes influence from Reggae (such as South Africa’s Lucky Dube), African Rhumba and international pop (such as Phil Collins and Michael Jackson).

In early 1996 at the age of nine Ricky was injured during the war where his injuries left him blind. Even though Rickson has had some major hardships and suffering in his life, it is easy to see how truly passionate and determined he is to live life to its fullest and how he wants to share this zeal for life with others through his music.

He eventually moved from his home country to South Africa where his passion and love of music became the driving ambition in his life. Rickson started his music career in his new home country by touring with a band, playing festivals and recording.

Although things were better in South Africa, he still felt the desire to follow his heart and do everything he could to make the move to Canada. With their knowledge of Rickson’s musical talent and his desire to work in this industry, the UN was able to make it possible for him move to Winnipeg where he now calls home.

Now that Rickson is in Winnipeg, he feels that he has the opportunity to truly explore his creativity. Dance is an important part of Rickson’s performance and experience of music (he himself dances and he also likes to have dancers as part of his live show).

Rickson is looking to give people something fresh and different. He wants to move people with his music, and also understands that the visual element of a performance is just as important as the sound. “People understand now (that) the blind can play music and play keyboards and sing, and yea its normal,” says Rickson, “but I want to show people something different… I want to show that people who are blind can do anything they put their minds to.”